What are Pelvic Floor Muscles?

The deep layer of Pelvic Floor Muscles (PFM) supports the pelvic organs such as the bladder and uterus and it keeps the anus and vagina closed. It resists downward pressure created when straining, coughing or sneezing and prevents evacuation of digestive contents at inopportune times!

Thus, the pelvic floor muscles perform a critical role in bowel and bladder continence and elimination, pelvic organ support, and sexual arousal. Electromyography (EMG) studies have shown that they also contribute to lumbar stability alongside the deep abdominal muscles. There is also evidence that the PFM work synergistically the abdominal muscles to provide stability to the sacroiliac (SI) joint. A recently published study found a significant difference in PFM function in women with low back pain compared to those without low back pain. Another study of women with low back pain who also suffered from incontinence found improvement in both conditions following a course of pelvic floor rehabilitation.

Many people believe that weakening of the pelvic floor muscles is normal with pregnancy and aging. It is common but it is not normal!  Generally, it takes about 6-8 weeks of rehabilitation exercises to increase the size and improve the function of the pelvic floor muscles.  Consistent adherence to the exercise program is essential for improvement. Studies have shown that between 60 and 80% of women who believe they are performing an effective Kegel exercise are not. Similarly, many individuals think that they are contracting their Transversus Abdominis muscle when they are really using other muscles such as the abdominal obliques.  One of the best ways to retrain the pelvic floor and abdominal core muscles is using Real-Time Ultrasound Imaging as a biofeedback tool. 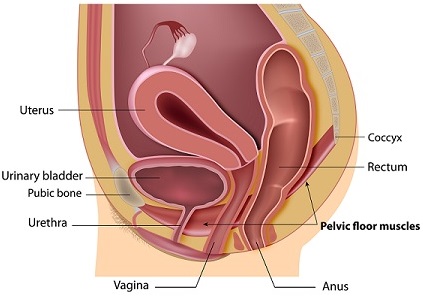